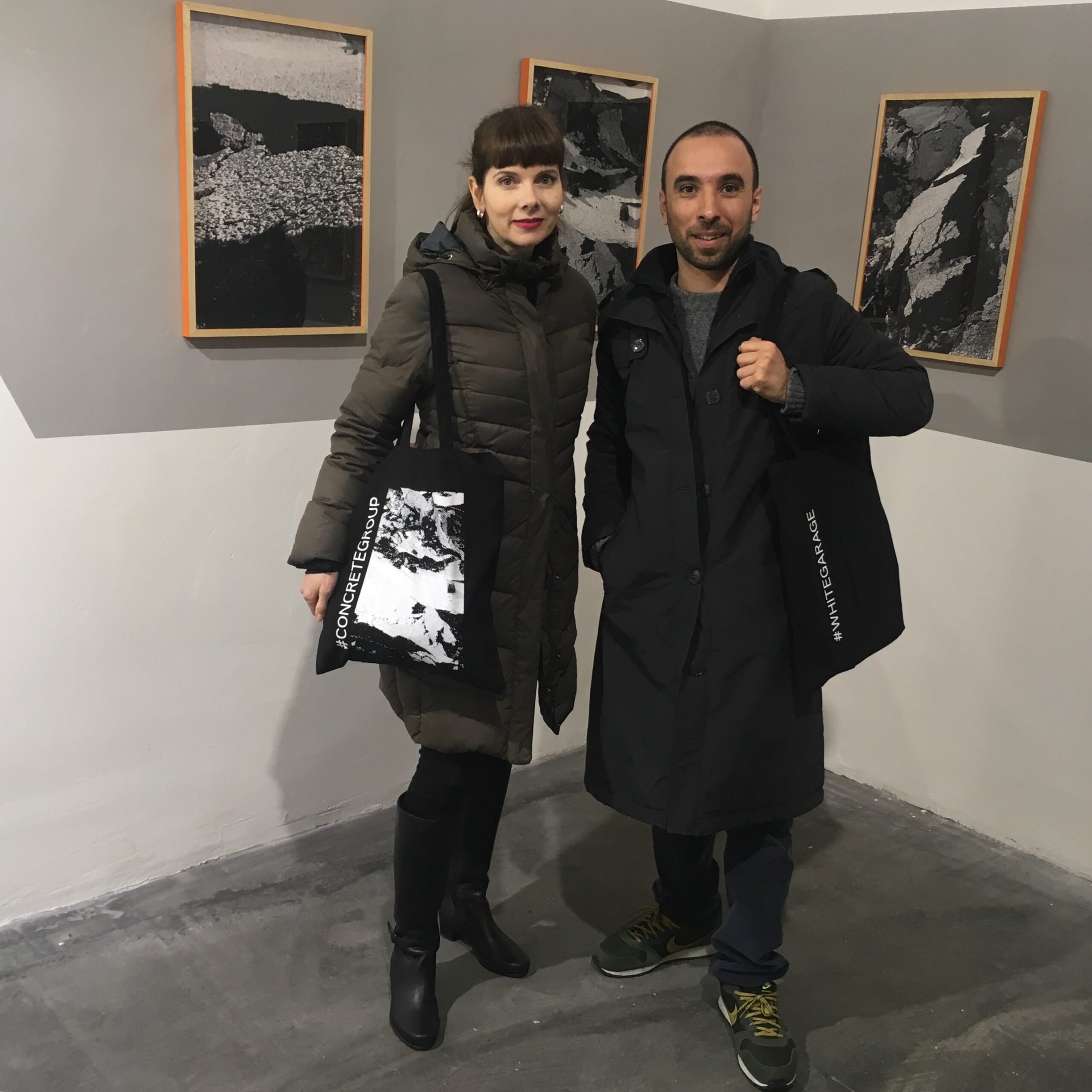 Concrete Group is the visual result of the conversation between two artists, Gabriele Abbruzzese and Lisa Wade. Coming from different countries, backgrounds and education, they decided to join their artistic research in 2015. Finding common ground in their aesthetics and drawing on their combined artistic practices, Abbruzzese and Wade work on the themes of social deconstruction and contemporary anthropological change, questioning the stability of our social bases.

The exhibition Due South at The Delaware Contemporary Museum in Wilmington (USA) marks the first time they have exhibited as a collective in 2017, after experimenting with the collaboration for the bi-personal, Low Brass, at La Galerie di Ginevra in Switzerland in 2016.

The solo exhibition, Artery, at the White Garage in Catania in 2019, represents a cycle of works that addresses the finite nature of human construction, focusing on the Imera bridge of the A19 motorway in Sicily, whose pylons have collapsed due to a giant landslide, cutting the main communication route between eastern and western Sicily. Concrete Group uses this local event as a pretext to question the repercussions of the environmental impact in the current era of Anthropocene. The photographic works A19 and the video Infinity (Loop) highlight the physical and emotional constraints of the flows, as well as the fragility of the infrastructures created by man.

Concrete Group is currently investigating the social and environmental impact of uprooting an entire city due to a natural disaster – the 1968 Belice earthquake in the Trapani area. The complicated local dynamics and the discordant testimonies of the citizens, in a limbo that lasted fifteen years, frame their controversial transfer to a new city built in an experimental way, through artistic and architectural criteria, without taking into account their concrete needs.

The photographs in the series Restoring the Road Routes of the Old Town Centre, presented to SWAB, explain the allocation of government funds to restore profitability and rebuild houses affected by natural disasters, with the aim of building the land artwork Il Grande Cretto by Alberto Burri, which incorporates the ruins of the city of Gibellina with a thin layer of white concrete.

In 2017, both artists represented the artist run space BOCS (Box of Contemporary Space) of Catania at the Lucca Art Fair; in 2016 they were visiting artists at the Massachusetts College of Art and Design, Boston and participated in the Bocs Art Residency of Cosenza. In 2015, they are part of the exhibition Crossroads at the Fondazione Brodbeck, Catania.

Gabriele Abbruzzese lives and works in Turin. In 2013 he graduated in Digital Applications for Visual Arts at the Academy of Fine Arts in Catania and now works with photography, video and new media. In 2014, Abbruzzese was a finalist of the FAM award, Fabbriche Chiaramontane, Agrigento. Other recent participations include: 2018, The Garden of Forking Paths Summer School by MASS Alexandria, Egypt, Manifesta 12 Collateral Event – The European Biennale of Contemporary Art, Palermo; 2015, Extraordinary trips to Von Holden Studio, Palermo; 2014, MOLECOLE curated by Galleria Occupata, Favara, Cinema d’essai, Ritmo, Catania and Give Away to Give a Way in Schaufenster, Berlin. Since 2015, he has been investigating exhibitions and artistic events throughout Italy through photographic and video documentation.

Born in the United States, Lisa Wade has lived and worked in Europe for over 15 years. With a Master’s degree in painting from American University, she currently works with photography, time-lapse video and installations. He has taught artistic practice in Italy at American University, Gordon College and SACI. He won the Installation/Sculpture section of the Celeste Prize International in 2010 and participated in the Italian Pavilion at the 54th Venice Biennale. As artist-curator, she took the collective exhibition Sing Sweet Songs of Conviction to five different countries from 2012 to 2013; as residency coordinator she followed the production of artists from Berlin, Mexico City and Boston in the art centers of Agrigento and Catania, and also in Sicily she brought together nine independent art spaces in the pop-up exhibition, MOLECOLE, spread in the city of Favara with the contemporary art magazine Balloon in June 2015. In 2018, Wade managed the organization and realization on behalf of Manifesta 12 – The European Biennale of Contemporary Art, Palermo of the Collateral Events section. Other recent exhibitions include: 2016, Gang City at Spazio Thetis, Venice (Venice Architecture Biennale, Reporting from the Front); 2015, Officine at Palazzo Lucarini Contemporary in Trevi, Give Away to Give a Way, BOCS (Box of Contemporary Space), Catania; 2014, Chautauqua Annual, Chautauqua, NY, curated by Jerry Saltz.