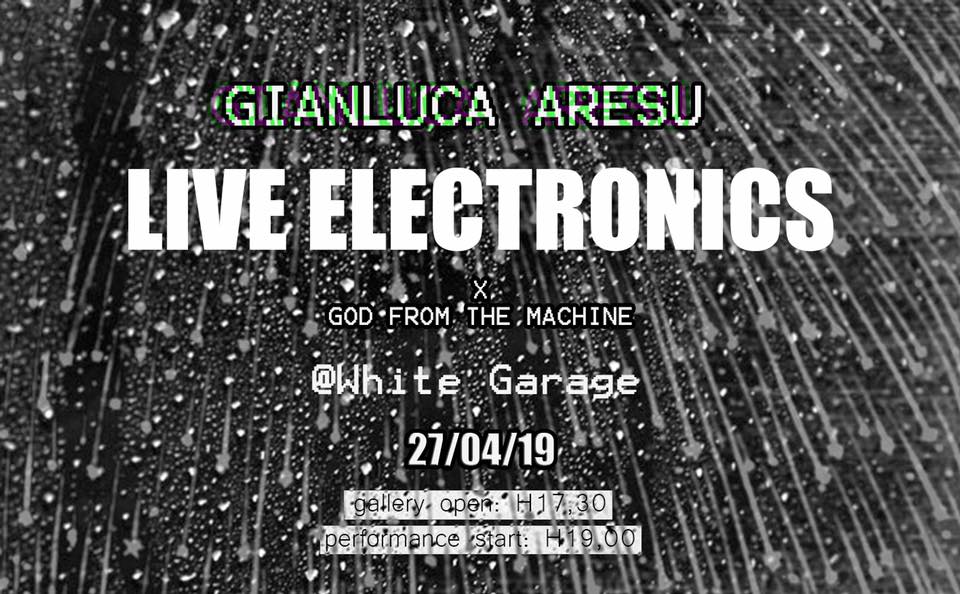 Gianluca Aresu: live electronics for God From The Machine

During the live performance, Gianluca Aresu elaborated fragments of text taken from “Untitled (The webscapes)”, video by Simone Caruso present in the exhibition, using a process of granular synthesis of sound, thus triggering a dialogue with the installation in the gallery, expanding its aesthetic and conceptual horizons.

What is a granular synthesis of sound?
Granular synthesis is a process of decomposing sound into fundamental units called grains. Each grain, also called “how much sound”, has a duration ranging from 1 to 100 ms. A subsequent procedure, consisting in the stratification and/or concatenation of a large number of these grains, makes it possible to create complex sounds.
The effectiveness of this synthesis methodology lies in the fact that it replicates the basic nature of certain acoustic phenomena.
To better understand the concept let’s try to think of the rain, where the single drops represent the smallest acoustic component while the final effect is the sound of the rain. The drops represent our grains: each of them does not fall at the same time and therefore the sound produced is different for each of them. Moreover, the impact on the different materials will cause differences in timbre: a stone, a carpet of leaves or a turf. All the components of these basic units or grains together will produce an acoustic texture or soundscape whose overall effect is the noise of the rain.

The first insights into sound as globules of sound data were given by the Dutch scientist Isaac Beeckman (1588-1637). Three centuries later, in 1946, Dennis Gabor (1900-1979) developed a mathematical model aimed at creating sound textures using the technique called granular synthesis. Gabor’s original intent was to reduce the amount of data needed in a sound communication, so that it could be comprehensible and qualitatively satisfactory in remote communications.
Gabor’s research was resumed by the Greek composer and architect Iannis Xenakis (1922-2001) who formalized the “grain” in its fundamental characteristics: width, duration, spectrum, development, etc.. In the composition “Analogique A-B” (1958-59) for string orchestra and magnetic tape, the part of the tape was made by cutting into small fragments a magnetic tape on which sine waves had been recorded and recomposing it in a completely different order in order to create a granular texture.
Curtis Roads in 1974, at the University of San Diego CA, programmed a computer that could produce 1 minute of granular sound in a week of calculations. In 1986 Canadian composer Barry Truax managed to produce the granulation in real time.