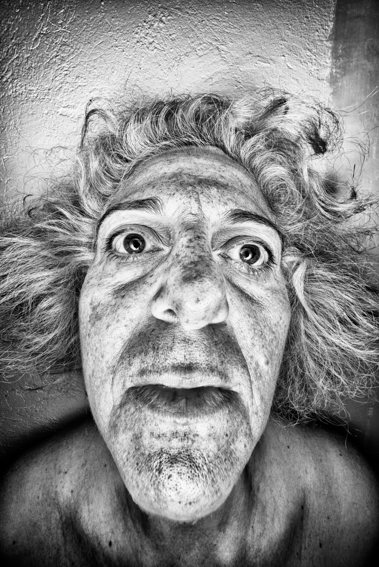 Roberto Davide Montalbano highlights the idea of an art that reveals the mechanisms of the contemporary. Estratti presents three projects that deal with different problems that have appeared since modernity, and even more, with the advent of digital media. The first series of photographic images, Ultra, questions the search for an artificial and unreachable beauty, without any value, reiterated and deprived of any meaning other than that of becoming part of the world of consumption. With the series Apertis Verbis we are faced with a reversal of the point of view. In a historical moment in which

is conspicuous, the presence of self-tips and the attempt to construct one’s own identity through clothes and consumer objects, images of naked bodies that do not have a face are presented, representations that through the body outline the history of the subjects photographed. Ipse Dixit, on the other hand, raises questions of a different nature from the previous ones: a reflection on the human relationships and on the relationships that individuals have with technology, paying particular attention to the relationships between artist, subject and camera.

Roberto Davide Montalbano was born in Catania (Italy) in 1983. As a child he already wanted to tell the world through words and drawings that almost photographed scenes of everyday life. In 2003 he discovered photography, but in 2007 he moved to Milan, where he devoted himself for two years to analogue photography. Since 2009 he has had the opportunity to travel the world and to refine his skills as a portrait photographer. In 2012, at the end of his travels, he engaged in documentary projects that saw him present in some demonstrations in favor of human rights held in Sicily. It will be this cycle of projects that will lead him to study contemporary art at the Academy of Fine Arts in Catania, where the thought of documenting the world will evolve in the desire to want to interpret it. Estratti is his first solo exhibition.