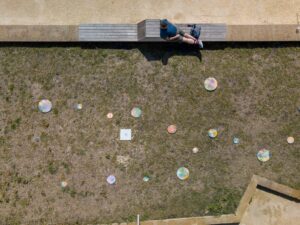 Salvatore Mauro was born in Augusta in 1977, graduated in Sociology at the University La Sapienza in Rome with a thesis on new forms of hybridization in contemporary art. He was the creator and organizer, with the artist Anna Milano Carè, of the BOX Art Festival in Rome. He was an artistic collaborator at the Teatro Vascello in Rome and editor of the editorial site of the magazine Next Exit. He lives and works in Syracuse where, in the suggestive space adjacent to the Maniace Castle, he composed the installation “La libertà è a noi”.

Presented briefly. Who is Salvatore Mauro?

I was born in Augusta, but I lived for eighteen years in Rome, where I worked with several museums including the Macro. I am an artist and curator, when I started this choice was harshly criticized, but history teaches us that an artist should not choose one or the other way, think of the Dadaists, Marcel Duchamp or the Bauhaus school of Walter Gropius, which graduated artists curators. Covering both figures is not anomalous for an artist, on the contrary, the setting is an integral part of the design.

You had already worked with these Costell-Azioni in the past. How did the idea come about?

My Costell-Actions, in fact, were born by chance: the organizer of the Emergence Festival, when he saw what I was creating with light and painting, suggested that I leave a museum room to try to communicate with the outside world. At the same time I was invited by Professor Navarra of the Faculty of Architecture of the University of Catania, based here in Syracuse, to present, as a sociologist and anthropologist, the first issue of a series of texts that profiled some architects who worked on the borderline between art and architecture. The series was called Costellazioni and the leitmotif was the ability of these personalities to dialogue with the outside world. Hence the idea of recreating an installation capable of dialoguing with the pre-existing architecture and reflecting my performative character.

Where does this performative side that characterizes you come from?

I trained in experimental theatre, I worked for eight years at the Vascello Theatre in Rome and I’m quite proud to have had Giancarlo Nanni as my teacher, who taught me how to perform. My Costell-Azioni are interactions with the spectator who thus becomes part of the work. Moreover, I am a sociologist and I firmly believe in giving everyone the opportunity to have a voice and express their ideas. My disability has undoubtedly limited my life, but it has not stopped my voice and I don’t understand why I should exclude this opportunity to others. This might seem like an attempt to do politics, even if the border is very thin, but it is absolutely not so, what I set out to do is to show others that, despite the democratic dictatorship in which we live there is always a way to express themselves and their opinions.

What is different between these Constell-Actions and the previous ones?

First of all this installation is not permanent, in fact I plan to move it inside a Syracuse church before the end of the year and then who knows. Secondly, the poplar plywood discs have simply been placed on the ground following a precise design, reported in the plan, which gives the user the opportunity to choose which piece to name or go and see up close. Previously I fixed them to the walls.

Was the choice of the courtyard before the Maniace castle intentional?

No, this too was a coincidence. I was invited by the organizers of the Ortigia Sound System to use this space, in fact, to design the installation I took inspiration from the song Sentimiento nuevo by Franco Battiato, the theme chosen by the festival. This song talks about freedom in love, in all its forms; I interpreted it as a 360-degree freedom that can touch various aspects such as politics, science, philosophy. And for this reason I ask the public to name the various points of the work with historical characters, known or not, who have affected these aspects.

What are your future projects?

Definitely continue this project for at least another year. Then I’m considering the idea of a residence in Barcelona at a hotel company to design the artist’s rooms and deal with street art.